Khiron is also known to the New World Community as the Kuei-Shen Hsien (a Hsien Taoist title he has carried since 1972) and has worked as a professional Clairvoyant, Psychometrist, Aura-Healer and Spiritual Counselor for twenty-seven years, in Arizona, California and his adopted home-state of Massachusetts. His past-life memories range from "the Great House" of Egypt to a Tibetan Shaman, several minor western philosophers, a number of American Indian chieftains and (of course) an African-born Gnostic from the caves of Nag Hammadhi Egypt around 100 AD.

Khiron is the founding Master of the Maitreyan Order of Hsien Tao, and his patron Diety-forms are Lord Maitreya the Kristos, Amen the Goat-Man "Primum Mobile" of Egypt, the Moon-god Shaddai El Chiiam and Eloh Giburah, the Swordsman of Heaven. You may occasionally glimpse Khiron traveling in the Astral forms of a Falcon or a Centaur; as a passenger in a ufo, or riding on the back of the Imperial Dragon of China. His hobby is Planet-Tending. His Gnosis is Etheric Energy-shaping, using Image, Sound and other Magic.

On 21 October 1999 Khiron became an Ascended Master. His ashes, the remnants of his robe of passion, lay beneath the globe within the pyramid. 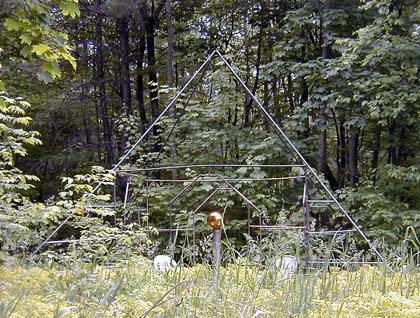